DON'T DO THAT! -how to drive a child crazy with your own fear

I've just been through my photo collection picking out a few pictures of things that I've seen children told NOT to do in various playgrounds where I've worked.  They are all activities that are relatively or completely safe, and activities which I might hover around but always allow- yet I've seen many over-anxious carers (and parents) try to forbid them.

Carers are possibly the worst about this- maybe because of local regulations which are over-restrictive and based on a fear of litigious parents, but more often perhaps because they simply don't want to risk having to fill in an incident report! Nothing to do with the child's learning and long-term wellbeing, really!

Have you stopped a child from doing any of these completely normal activities, which all help their brains to develop competent risk assessment as well as encouraging self-confidence, creativity and motor control?

Stop saving me, you're holding me back!

Have you ever dreamed up an exciting, ambitious plan, only to have someone stop you in your tracks with their own doubts and fears?

If you have, you'll know that it's a truly frustrating experience. You know what you want to do, you've thought it through, you're full of motivation... and then some wet blanket puts out the fire in your heart and makes you doubt yourself.

I see well-meaning childcare workers and parents do that to children every day. And I realise that I've often done it myself.

In fact, every day that I work in childcare I have to consciously stop myself from over-helping and over-saving children.  Here's just one example of how rewarding it can be to control that urge to save a child.

Last time I dealt with children's irrational fears, the ones that are not based on logic or reality.  But what do we do when a child has absolutely rational fears, due to some sort of trauma?

It's time to introduce the delightful 'Jack' and 'Jade', fraternal twins who were 23 months old when a tornado struck their tiny town in Northern NSW.  Their mum has agreed that I can tell you their story. 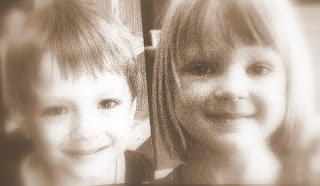 When I was five, I started catching the school bus with the other kids from my block. There were two notable characters at that bus stop most mornings, other than the kids going to school and the odd parent; one was Rastus, my terrible piano teacher's brown kelpie, and the other was Garry.

I guess Garry was around seven or eight, in chronological years, but it was obvious even to us five-year-olds that there was something terribly wrong with him. He couldn't talk, except in gutteral grunts. He didn't go to school like the rest of us and never seemed to be in the company of a parent. Worst of all, he never wore any clothes. He ran around the bus stop stark naked, even on the chilliest winter mornings, grunting and laughing as though it was the most natural thing in the world.

To me, Garry seemed more animal than child. This is important in the context of what happened.

I loved going to school, but both Rastus and Garry made me deeply uncomfortable. They both seemed uncared for and out of control, though I couldn't have put that into those words at that age; I recognised that this was somehow wrong.  I didn't ever mention those feelings to my mother, who would escort me up the street to the bus stop and then usually leave me there with the other kids and whichever mothers were having a friendly gossip today. It was a very safe community in those days.

Why didn't I mention that I felt uncomfortable? I had a great vocabulary, even then. I guess I had always prided myself on being resourceful. I wasn't a whiney child. I probably figured that this was just one of those things I had to deal with on my own.

Have you got a resourceful child?  Ask them what bothers them now and then. They may be carrying something.

So there I was at the bus stop one day, my mother having left to go home, when something truly dreadful happened- something that the most resourceful child on this earth couldn't be expected to cope with.

Email ThisBlogThis!Share to TwitterShare to FacebookShare to Pinterest
Labels: fear

As you'll know if you've read my profile, my original career training was as a kindergarten to Year 12 Music specialist, and I've spent most of my life teaching teenagers. Music was so much part of my life for over 30 years that when I moved to the world of Early Childhood, I brought a lot of it with me without even thinking about it.
I had to learn a whole new repertoire of songs, of course, and dredge up the songs I could remember from my own and my son's childhood, but with my background it was easy to find ways to incorporate music into the children's days.
So I guess it's time for me to share some of my methods with you. Many of these ideas will work just as well at home as in a care setting; don't be afraid to experiment!

I first met Theo in a centre where play-based learning had been interpreted by the staff as 'let the kids loose all day with all the toys, and hover around looking busy'.  Oh, that's NOT how the director intended it, believe me! But that's pretty much what happened on the floor- a free-for-all.  Structure was at a bare minimum, instructions and direction were endangered species, prepared intentional teaching was well nigh impossible and somewhat frowned upon- staff were directed to acknowledge at all times that 'the children were the teachers' (which is a concept that has much worth if you cut out the words in italics, which strike me as an invitation to staff laziness).

My introduction to Theo was watching him lift up a toy broom and prepare to beat a much younger child over the head with it. When I shouted his name and told him firmly to STOP from the other end of the room, he was sufficiently surprised by my raised voice to freeze in mid-air before anyone got hurt (and I was able to sprint down the room and relieve him of his weapon). But on many later occasions I didn't catch him in time, and he managed to inflict violence on other children. Theo was an enigma to the regular staff, an inconvenience, a problem. No-one had a clue how to get through to him. No-one liked him- neither his peers nor his carers. Not even me. Yep, he fell into the category of a child for whom I could not feel the love.

Are these two paragraphs related- is this a case of cause and effect? In retrospect I think so, and this is why.

The limits of our responsibility for abused and neglected children

One of the hardest things for new carers who really do care is understanding that your role stops at the door.
For hours each day, we put these children first and do our absolute utmost to make their day happy and successful.  Many of us put heart and soul into the welfare of the kids in our care.

But for children, daycare is only one small part of their world.  Each child has a context, a home background over which we have little or no power, even if it's a highly undesirable environment for a child.

Sure, we can fill in the appropriate forms when there's an 'incident', we can talk diplomatically to the parents, we can call in social workers.  In extreme cases where there's clear evidence of wrongdoing, we can call DoCS and cross our fingers about the result- but when a child comes from an abusive background (and that can mean physical, sexual, emotional or psychological abuse, or simple neglect) we have to realise the boundaries of our influence.
See the rest of this post>>
Posted by Aunt Annie at 3:44 PM 4 comments:

Coping with criticism of our parenting or care philosophy


We spend so much time observing and thinking about our children, listening to them, analysing what they do... we try so hard; we exhaust ourselves trying to do the best we can.

And then there's that moment when someone questions one of our strategies, or enthusiastically suggests a better way, or straight-out criticises our practice. Maybe something that one of those toxic mothers at the school gate or playgroup said got right under our skin.  Maybe we got flamed in some forum discussion.  Or maybe we just read an article in the news or online that challenged or disproved our views, and we beat up on ourselves. Maybe we're a carer, not a parent, and a colleague or our boss just gave us a drubbing.