The preschooler as author: first steps in creative literacy 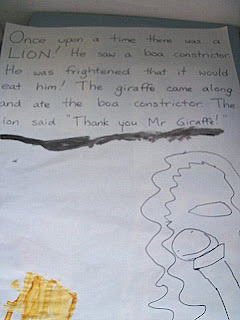 Today my group of six 4-year-old preschoolers made up their first story. They looked at me in complete amazement (and to be honest a fair amount of disinterest) when I told them what we were going to do today- but 20 minutes later we had a story up on the wall, and they were shouting 'Let's do another one!'  with great excitement.

It's not the first time I've had this reaction to such a seemingly advanced activity with completely normal (ie not necessarily gifted) 4-year-olds. Yes, the story had a beginning, a middle and an end, it made pretty good sense, and the ideas were all from the children.  The only tricks to achieving a similar result with your own group of young children are in the preparation and the timing of any subtle 'nudging'.

So here's a user guide to starting story-writing with little kids.

Books are like magic to little children. They appear on the shelves from nowhere and contain whole worlds. So the first thing you need to do is make the connection between those marks we adults make on paper, the thoughts inside our heads and the books the children love.  I do it something like this:

(holding up a book) Did you know that this story started inside someone's head? A person sat down with a piece of paper like this (hold it up- use butcher's paper) and a pen like this (hold it up- use a board marker) and made it all up.  And then they drew the pictures- or if they weren't very good at drawing, they asked someone else to help them.  I bet WE can make up a story like that.

Yes we can! Let's have a look at this story (picking up a well-loved and fairly simple story- I used 'The Very Cranky Bear' today) and find out how to start.


Okay, first we need to make up our mind who the story is about. (opening the book and showing the pictures) THIS story is about a zebra, a moose, a sheep and a lion.

Then we have to give them a problem. (turning pages) These animals want somewhere to play, but it's raining and cold and they're getting wet.  PROBLEM!! So they go in the cave, but- there's a BEAR in the cave! He chases them out! BIG PROBLEM!!!


Then we have to fix it so everyone's happy. What do these animals do to fix it?

(turning pages) First they dress the bear up, but that doesn't work, because the bear is tired and just wants to go to sleep.  So Sheep shears half her wool and makes the bear a pillow. The bear has a lovely sleep and the animals are allowed to play in the cave. So everyone's happy! The end!

Note that it's important to use a story that YOUR kids already know well.  You'll probably find that they tell you what happens (if you're smart enough to hush at the right moment and let them!), without you having to retell the whole simplified story yourself.  What you're doing is showing them the bones of the story's structure- characters, problem, solution. You don't actually read them the story- just summarise it in terms of those three things.

'Dear Zoo' is an even easier book to use for this. Character: a child who wants a pet. Problem: the zoo keeps sending silly pets. Solution: they send a sensible pet- a dog.  But you can do this with almost any plot-driven children's picture book.

For the next step, you need to have prepared some visual stimuli which will capture the children's interest- and that means knowing what your kids are interested in THIS week.  My kids are currently into wild animals, so I chose a tiger puppet, a giraffe puppet and a plastic snake. Three is plenty! Don't give too much choice the first time!

I just held the three props up and said 'Who will we write our story about?' and then waited for a decision (it took about two seconds for them to vote for the tiger and the snake).

'What will we call our story?' (two more seconds for someone to say 'The Tiger' and someone else to add 'The Tiger-Mider!' Creativity happening already... a spontaneous almost-rhyme!)

At this point I started writing on the butcher's paper with a felt pen, saying the words aloud as I wrote them- 'The Tiger-Mider, by (names of all the kids)'.  Suddenly I had absolutely rapt attention as they saw their words appear on paper. You could almost hear the connections clicking together.

'Alright, we've got a scared snake.  What are we going to do to fix it?'

At this point, prepare yourself for anything!!  Try not to preach too much- they might come up with some quite outrageous ideas...

'Have we fixed the problem? I think the snake's still scared.  What are we going to make them do now?'

'Is giraffe going to let them keep fighting? Someone might get hurt!'

It's very important to say the words as you write them, and to read the story back frequently, pointing to each word as you read it. This really connects the children to the written word, and the expressions on those faces as they realise that their words can be 'saved' and brought back like this is priceless.

From here you can go on to illustrating the story.  Again, let them go for it- don't direct too much, and don't be phased by pictures which seem to bear little relationship to the story.

We didn't have time to go on to illustrations today, but the last time I did this with a group I let them work either alone or in small groups, and the collaborations I got in the small groups were wondrous and unexpected.  I provided black felt pens and food-dye water paints, which gave quite a spectacular effect on the absorbent butcher's paper; the children quickly decided who wanted to draw and who wanted to add the colours, splitting the task quite independently of my input.  Children who had never played together before were having quite magical interactions and producing thoroughly beautiful pictures- some totally on topic and some moving quite laterally. 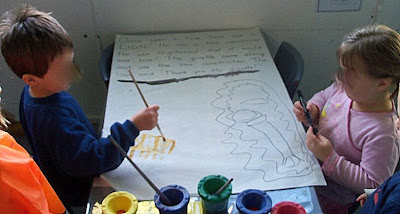 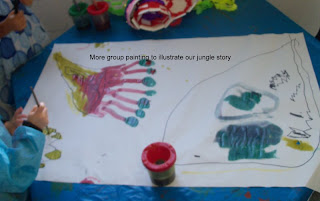 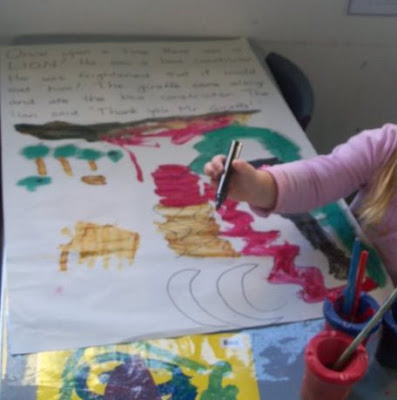 I hung all the pictures near the story and let the viewer enjoy the whole creative process as it stood.

This is one of those activities which is terribly dependent on the teacher's self-belief and enthusiasm. YOU have to believe it's going to work, and that conviction has to show in your voice. Use your most expressive face, use your most enthusiastic voice, use your props well, and make sure you've prepared  beforehand so everything is at hand- wandering off to look for something in the middle of this process will destroy the flow.

I promise, if you do this with complete faith that it CAN be done, the results will delight you- as well as delighting the kids and their parents!
Posted by Aunt Annie at 10:49 PM

PLEASE leave your comments here so all readers can see them- thank you!