Good news about risky play: where the magic happens

Do you remember this post about my risky play research assignment last year?

By the time I'd finished that assignment, I was shaking my head in amazement. My amazement was not caused by the children, who took to my risky play scenarios like the proverbial ducks to water- 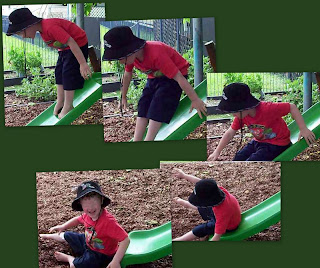 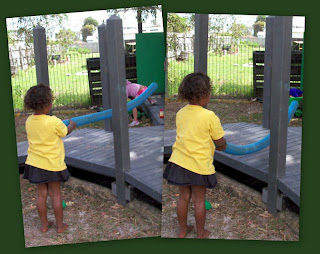 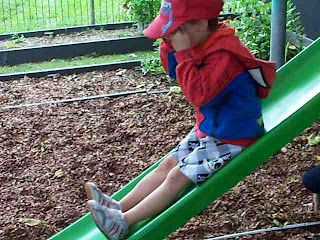 and then ALL settled down quietly inside to table activities  (unheard of on that particular day of the week with that particular, very energetic demographic!).

No, my sad amazement was the result of my realisation that my biggest problem was going to be changing staff attitudes to risky play. Honestly, it's so easy to get ourselves stuck in a box called 'our comfort zone', and that's particularly true of risk versus safety. It's ever so much easier on our anxieties to be over-cautious. As Tim Gill points out, we live in a risk-averse society. Early childhood professionals are as subject to societal pressures as the next person.

But the truth of working with children is well-illustrated by this picture doing the rounds of Facebook: 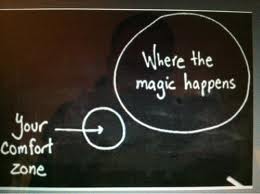 If we want magic to happen, developmentally speaking, we have to allow children to be independent- to assess and take risks within our controlled environment, to fail sometimes, to try again. We have to be prepared to apply the odd bandaid and ice pack. We have to dry the odd tear.

You don't change attitudes in a risk-averse society with one day of research activities, no matter how successful your work has been. There was no 'aha moment' that day for the staff. What I saw back then was entrenched risk-avoidance, and a failure to even notice the positive change in the atmosphere created by a strenuous morning of risky play. Comfort zones tend to have solid brick walls around them, with nary a window in sight.

It was, um, depressing.

So when I returned to that centre recently, some six months after completing my research, I suppose you could say I was feeling a bit hopeless. But guess what? I have some good news.

I offered to set up the yard, and I found that the slide, which had been packed away at the back of the shed as 'too dangerous' before my assignment, was in easy reach and had clearly been used. Hallelujah!

I set it up, and when the children came out they slid down,  climbed up the slide, slid on their stomachs, came down sideways, jumped from the top onto the soft fall and performed all sorts of other crazy 'tricks'- without any adult ever saying 'stop'.

There were no collisions. Nobody got hurt. Nobody pushed. Everyone had a ball.

I got out the balance beams, and set them upon the higher setting- unheard of six months ago- with a thin mattress invitingly placed alongside.

"Can we jump off?" asked one child, eyes sparkling.

And they did- all of them- some leaping without hesitation, some being more cautious, some so confident they did tricks. One girl had perfected a 270 degree turn in the air by 11am.

Nobody said "stop". Nobody got hurt. Nobody pushed. Everyone had a ball.

Then one little live-wire boy decided he wanted the planks turned into slippery dips too. I watched him try to pick up the heavy wooden planks by himself to rearrange them. I said nothing.

He looked over to me, struggling, and I said "Do you want some help?" He nodded, grinning, and directed me to where he wanted the plank to go.

"Is that safe there, or too wobbly?" I asked.

Soon all the planks had been turned into slides, in a way I never would have thought of myself! Other children noticed the rearrangement, and started to develop plans of their own. Next thing, the mattress had been moved to the end of the slide and some children were flying down and finishing off with a somersault.

On the other side of the playground, a somewhat withdrawn child started trying to climb the latticed walls of the sandpit (on the inside, I might say, where he would only fall on sand). I didn't stop him. Neither did anyone else.

He got right to the top and touched the ceiling; he investigated every 'bug' he could find, and brought some interesting 'treasures' down to show the other children.

A smaller child tried to climb up, and failed.

He accepted this happily enough.

The screams that day were only ever of delight. I didn't need a single bandaid, and I didn't write a single accident report. When the children went inside, again they settled down to table activities peacefully- even that little live-wire boy!

Yes, there had been a slight change in the staffing- and I don't for a moment underestimate the impact of that. Changes of attitude require fresh outlooks and strong leadership. It wasn't all about what I did that day six months ago- not at all! But I think I may have broken the ice, and then a new permanent staff member with an open mind had applied gentle heat.

What I saw from the children confirmed everything I've learnt through my reading about risky play. There was a noticeable range of behaviour on the play equipment, depending on the individual child's confidence in their own skills. In other words, the children only took risks they were comfortable with. In the absence of an adult voice crowing "Be careful!" at 30 second intervals, they took responsibility themselves for being careful while challenging themselves appropriately for their own developmental stage.

Isn't that what we want? Doesn't that make our lives easier?

Even more interesting than that was the impact that having some agency had on these children. My little live-wire, for example, had started the day by punching, biting and kicking me- a sort of welcome by fire (I think perhaps he was so pleased to see me that he couldn't find any appropriate way to express it). A little firm holding of hands and gentle talk had helped him to pull back a little, but what that child needed was to express himself physically.

He needed challenge and risk, and he got it.

What would have happened if he'd had some adult shouting "Slow down, you'll hurt yourself," or "Throw the ball at that target," or otherwise trying to contain his energy to a risk-free box? You join the dots. Where would that energy have gone?

And what about the agency in designing his own play space? Our interaction over the placement of the beams particularly delighted him; he flew up and down the structures he'd designed, and then- wonder of wonders- invited others to join him (wow, without punching them?!), grinning broadly the whole time. He shared; he took turns.

That was a very desirable social outcome from what started as a physical activity and then became a technological activity.

And my other, socially withdrawn young friend suddenly wanted to share his findings, suddenly shared with me and with his peers his interest in bugs, suddenly could do something the others couldn't do and stood tall.

Don't underestimate the power of risky play. It can often be that place 'where magic happens'.

PLEASE leave your comments here so all readers can see them- thank you!